Atlassian broke all of the rules when it emerged out of the tech wreck. Its success proved that Australian startups could play on the world stage and helped pave the way for the country’s next wave of budding entrepreneurs.

The origins of Atlassian

Mike Cannon-Brookes and Scott Farquhar struck up a friendship during their first year of computer science at the University of New South Wales (UNSW).

The two resisted job offers from big corporations to start their own software company – just as dust was settling from the dot-com bust.

Loading up on $10,000 worth of credit card debt to fund the new venture, they were unknowingly creating Australia’s most successful startup.

How? By providing the management tools they knew developers needed.

And so they did. The startup would end up powering organisations from Microsoft and Amazon to Harvard and Toyota.

Despite its high profile, few people actually understand what Atlassian does. In a nutshell, it provides software tools with names like Jira and Confluence to help manage teams and keep developers on track.

These have become fundamental to the teams building some of the world’s biggest companies. In short, Atlassian sold the shovels during a technological gold rush.

Nor is the demand for management tools slowing down. Forecasts suggest the market is expected to triple between 2020 and 2027. Some US$752 billion is expected to be spent on enterprise software next year globally, with sales growing at a rate of 12% annually.

To keep up with its rivals, Atlassian will need to keep making strategic acquisitions. To date these have included task manager Trello and artificial intelligence provider Percept.AI.

Atlassian is hardly alone in the market however.

Tech giant Microsoft is investing heavily in workplace tools like Teams and Azure while up-and-comers like Asana and Slack are placing greater pressure on Atlassian’s market share (Atlassian actually conceded ground in and sold a product to Slack in exchange for equity).

It’s also not immune from inflation. Even as it promotes a generous WFH policy that only requires staff to go into the office four times a year, Atlassian is being forced to meet rising tech salaries in a bid to retain staff.

The company meanwhile is warning of shrinking margins this year as it looks to keep investing in new products and migrating customers onto the cloud.

These challenges and the large cost of innovation have eaten into its bottom line. To absorb rising costs, Atlassian is hiking its own prices potentially undercutting its own user growth.

In the background, Atlassian is being buffeted by a tech crunch that has seen its share price more than halve this year. Whether it can maintain its impressive pandemic-era growth rate remains an open question. 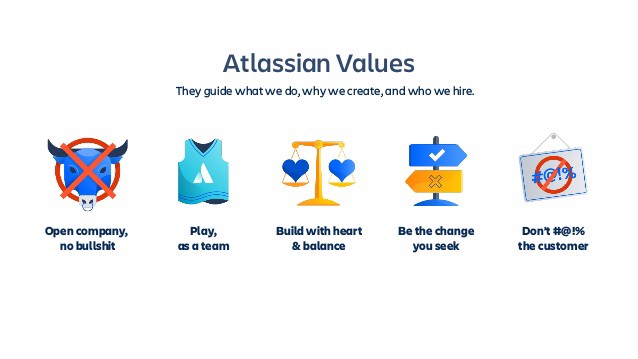 While Atlassian’s product suite is well-used among developers, the company’s future looks to lie throughout organisations in non-tech teams.

In 2018, ANZ – one of Australia’s largest banks – signed a deal to make those tools available to all staff – not just those messing around with code.

Part of that will come down to how successfully it can monetise of user-friendly tools like Trello and convert free users into long-term paying ones.

The other part of the equation will be how much value it can derive from its early-stage fund Atlassian Ventures, which looks to support startups to build products for the company’s ecosystem.

It’s this scale that remains crucial to Atlassian’s future. By filling in different niches, Atlassian may be able to build out an entire network of products that can help companies of every size complete any task.

If Atlassian can appeal to broader management, it can seize market share in an even larger market, seized upon by its outsized rivals.

While the stock price has suffered greatly this year, the company is making long-term adjustments to build a more robust business model for tomorrow.

Trade Atlassian on Superhero for $0 brokerage or dive into your favourite companies on Superhero’s Learn Hub.