This analysis of Calix is part of Equity Mates Summer Series, proudly supported by Superhero. Listen to the podcast episode with CEO Dr Phil Hodgson here.

Industrial solutions and kiln technology may not be the most exciting field. But Calix is at the forefront of solving one of the biggest challenges the world faces in combating climate change. And they are one of the only companies in the world with a solution to solve it. That, for us, is incredibly exciting.

We aren’t the only people that think Calix is an exciting company. The share price is up over 600% in the past 12 months as the market gets very interested in Calix’s technology and its prospects globally.

We have also awarded Calix the most exciting company tagline – Because Mars is for quitters. Take that Elon Musk.

But the most exciting thing about Calix is the problem it is working to solve. The cement and lime industry is one of the biggest contributors to climate change, responsible for 8% of the world’s carbon emissions. For context, that is more than the global car fleet. Calix’s kiln technology offers the possibility of zero carbon cement. For us, that is an incredibly exciting opportunity and an Australian company worth celebrating.

Tell me about Calix

For Calix, everything starts with their kiln technology. They are in a number of industries that may not feel like they have a lot in common – agriculture, aquaculture, food and beverage, winery, water utilities, mining and processing and cement and lime. The element that ties these business units together is they all have products that have been made from Calix’s kiln.

So let’s take a look at the kiln.

According to Calix, there are three key benefits of their kiln technology over the traditional alternative.

Each of Calix’s products competes in their own industry with different competitors and different market dynamics. For this breakdown we are going to focus on the global cement industry, but if you were thinking about investing in the company it would be important to understand all of Calix’s products and their respective competitive landscapes.

Globally, the cement industry is dominated by one type of cement – Portland cement. It has been the world’s standard since the 19th century and accounts for 98% of global cement production. This cement has two key ways it emits carbon

For context, below is a diagram of a traditional cement kiln that can be compared to Calix’s diagram above.

Calix offers solutions to both of these sources of emissions. Their kiln technology captures any carbon dioxide released from limestone and rather than being heated with fossil fuels, it can be heated using electricity. However, the cement Calix produces is far more expensive than traditional Portland cement, which will remain a barrier to adoption.

There are other alternatives for low-carbon or zero-carbon cement. One of the most common is high-blend cement, where Portland cement is blended with other materials such as fly ash, slag, clag or ground limestone to reduce its carbon intensity. There is also geopolymer cement made from fly ash, slag or clay. These are low-carbon (as opposed to zero-carbon) options but are cheaper than Calix’s cement. Without a price on carbon, it will be difficult for Calix to compete with these alternatives (which is why Europe, where there is a carbon price, has been the quickest to embrace trials of Calix’s technology).

In our research on Calix, we came across another cement that would be even better for climate change than Calix’s zero-carbon cement. We were introduced to the concept of ‘carbon negative’ cement. That is, cement that actually soaks up more carbon dioxide than is emitted in its production. There are a number of businesses racing to commercialise this (but, important to note, you’ll also read articles from about 10 years ago of a number of companies racing to commercialise this – so carbon negative seems like it will be a marathon, not a sprint).

The long and the short of it is this – the cement industry needs to change for humanity’s fight against climate change. There are a number of low-carbon, zero-carbon and carbon-negative solutions that have been proposed. The race is on to convince the world which solution is best and get it to commercial scale at a price point that can be widely adopted.

Calix is right in the middle of this race.

Up over 600% in the past year, Calix now enjoys a market cap of over $1 billion. Calix earned $19 million in revenue in FY21, up from $3.5 million five years ago. This is an impressive 41% compound annual growth rate. The company is not profitable and losses have really started to extend over the past few years as they race to commercialise their zero-carbon cement solution. 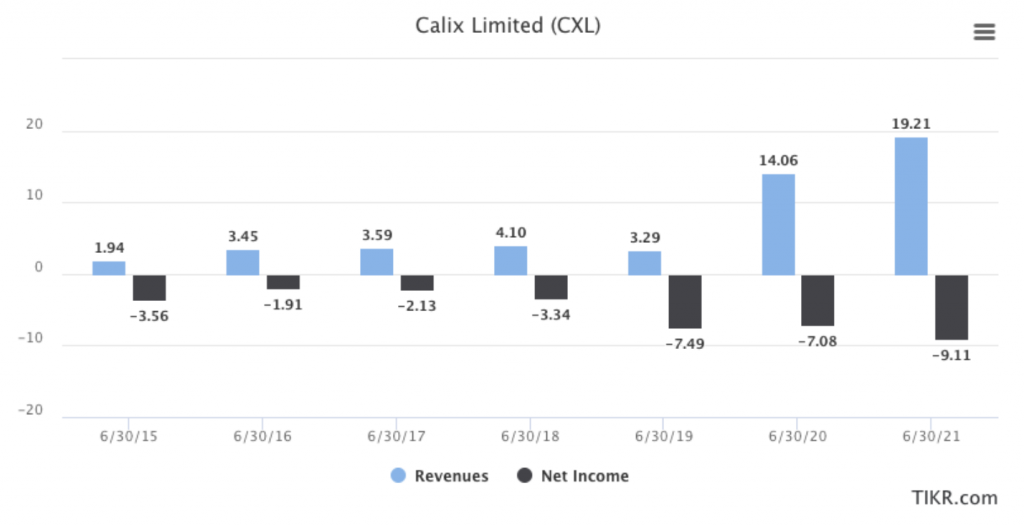 One thing to note, a $1 billion market cap on $20 million in revenue gives Calix a price-to-sales ratio of 50. This is the kind of valuation that the market usually reserves for fast growing software businesses. Unlike a software business, if Calix is successful they will still face billions of dollars of costs to open new plants and raw input costs. Industrial businesses just do not enjoy the same operating leverage as software businesses (in software, you build it once and can sell it one million times. In the cement business to sell more cement, you have to make more cement – and that costs money).

So it is important to be mindful of the valuation that Calix is trading at. There is no doubt that if it can take a meaningful share in the global cement market, it will be worth a lot more than $1 billion in the future. It is just important to note that the current share price has a lot of expectation built into it.

One thing that we love about investing, is how it allows you to be a more curious person and learn about industries and companies you’d otherwise never come across. Calix is a prime example of that. An Australian company working on one of the biggest environmental problems the world is facing. If they can successfully scale their technology and meaningfully reduce the carbon emissions coming from the global cement industry, that will be a major step forward in the fight against climate change.

So while it remains uncertain if they’ll be a great investment long term, we’re certainly cheering them on.

This analysis of Resmed is part of Equity Mates Summer Series, proudly supported by Superhero. Listen to the podcast episode here and learn more about….