In just a few short years, Uber did the unthinkable and coaxed us into the cars of complete strangers. The once radical idea has become a norm as millions of people now don’t think twice about ordering their next ride home.

The origins of Uber

In 2008, two entrepreneurs were attending a conference in Paris when, on a cold winter’s night, they couldn’t find a taxi. Why couldn’t you just request a ride from your phone, they asked. Originally envisioning a shared limo service, they registered the domain UberCab.com on their return to the United States.

The idea ruminated for months before Travis Kalanick and Garrett Camp began working seriously on their side project. By 2010, they were testing their bold new idea and picking up their first passengers in San Francisco.

The simple premise of finding a ride quickly and paying a fixed price caught on like wildfire in Silicon Valley and across the United States. Within 18 months, Uber was launching internationally – fittingly, back in Paris where it all began.

Uber by the numbers Uber has the largest global footprint, operating in more countries than any of its peers and – as the first cab off the rank – has become synonymous with rideshare in many parts of the world.

Yet as it faces off against a growing number of rivals, Uber is also quickly diversifying. Its food delivery arm, Uber Eats, turned profitable this year while it has diversified itself by launching a freight business in 2017 and a parcel delivery service during the pandemic.

The initiatives are working, lifting Uber to make its first operational profit ever late last year – and it’s not slowing down with its ultimate goal on becoming a ‘super app’ (more on that below). Historically rideshare companies have struggled to turn a profit with major players spending big to sign up customers and achieve scale.

Immense price competition has prevented Uber from maintaining profitability. But as the business grows, it’s getting closer. In 2020, Uber lost US$6.7 billion. Last year it lost just US$400 million.

Beyond the bottom line though, there is also the question of regulation. The Uber model has thrived by operating in a legal grey area, depending on drivers being classified as ‘contractors’ rather than ’employees’.

On this point, Uber has been in and out of the media spotlight and various courtrooms arguing for the former – largely with sucess. But its a mark of its ubiquity that Uber is now both the poster boy and the whipping boy for the industry as it faces scrutiny in countries like the U.K. and Australia.

If it were forced to overhaul its operations, it could make labour more expensive and push profitability even further away. 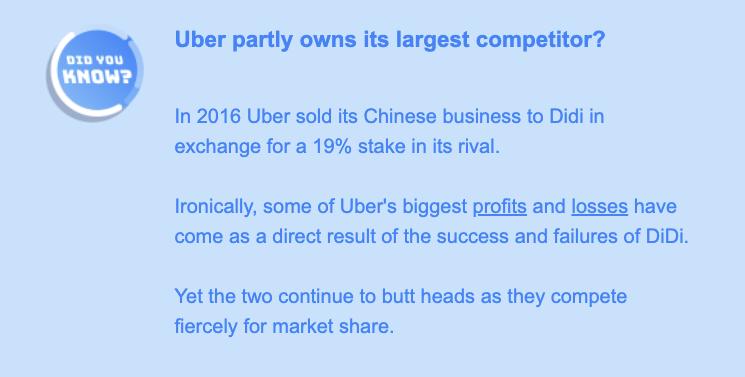 Looking ahead, Uber seems like it is heading into another serious phase of expansion.

It has begun to absorb taxi drivers – Uber’s oldest and more combative adversaries – into its rideshare app. Having experienced delays and a lack of drivers during the pandemic, the company says its goal now is to have every taxi on the platform by 2025.

Meanwhile CEO Dara Khosrowshahi has his eye on turning Uber into the ‘Amazon of travel’. The former Expedia boss wants to integrate trains, planes, buses, car rentals and even hotel bookings into the app.

While the booking market is already full of large syndicators, Uber’s plan is to become the one-stop shop that can take you down the road as readily as it might to Rome.

By clipping the ticket on every leg of your next holiday, Uber believes it can hit a home run to reach scale and profitability in one swift move.

Trade U.S. companies like Uber on Superhero for $0 brokerage.

This analysis of Resmed is part of Equity Mates Summer Series, proudly supported by Superhero. Listen to the podcast episode here and learn more about….